skip to main | skip to sidebar

“Say Kids! What Time Is It?” …..That’s the way the Howdy Doody show always started and, being a Baby Boomer, I was devoted to this show in the 1950s.  Buffalo Bob Smith  was the MC of this very popular children’s TV show.  He was a very nice looking man and he wore a fringe enhanced western costume. He had a beautiful smile that lit up the television screen.

The cast of characters on the show were marionette puppets.  The star, of course, was Howdy Doody, a cute freckle faced, redheaded little boy, dressed like a cowboy in blue jeans with a red plaid shirt, a bandanna around his neck and he wore red and white cowboy boots.

We children of the 1950s had no idea what color his costume was because none of the TVs were in color…….everything was in Black and White.  Did we care…..no….we used our imagination.  It was a wonderfully innocent period of time.  Eisenhower was the President, the hit song on the radio was Patti Page singing “How Much Was That Doggie In the Window,”  “Mr. Potato Head” was the biggest selling toy, and Elvis Presley hadn’t happened yet.

There were a few human members on the show, which included a clown named 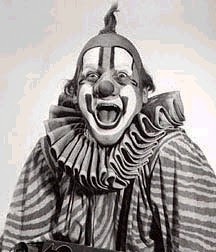 Clarabell who did not speak but honked a stupid horn that was part of his costume. He was a perfect foil for Buffalo Bob.

and there was the beautiful Princess Summerfall Winterspring 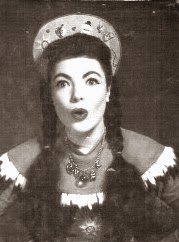 The puppet cast of characters were Phineas T. Bluster, the Mayor of Doodyville who was a cantankerous senior citizen.  There was Flubadub, a mixture of eight different animals…..he was very strange, but funny, and Dilly Dally, a good friend of Howdy’s.

Buffalo Bob would get things started by sitting at his piano and playing the melody of “Ta-ra-ra Boom-de-ay” which now became “It’s Howdy Doody Time, It’s Hoody Dowdy Time, Bob Smith and Howdy Do, Say Howdy Do To You.  Let’s Give a Rousing Cheer, Cause Howdy Doody’s Here, It’s Time to Start the Show, So Kids Let’s Go.”

The audience was ALL children, and Only children, about thirty total and they were called “The Peanut Gallery”.  They sang along with Buffalo Bob and on the last two words of the  song “Let’s GO”…...they would really yell and cheer.  They all seemed immensely happy to be there.  I was So into this show that I wanted nothing more then to be a member of that Peanut Gallery, but alas….it was not to happen.  You don’t always get what you wish for……..or Do you?

I finally grew up and became a professional dancer in New York City and did a little acting, as well.  After my dancing days were over, when I was in my late thirties, I started to write musicals with my husband Bill, who is a singer, musician and composer.  We struggled along doing extra work in films and part time jobs to keep body and soul together.  Doing extra work was not a glamorous job, by any means and I was always rather blasé about working with any of the movie stars.  It was interesting to watch how they worked, but I never got excited about seeing or meeting any of them.  It was just a job to pay the rent.

Bill and I also worked with conventions that came into New York City, and one year we were asked to work the Annual Toy Fair.  When we got to the Convention Center and settled into the registration area, we found out that Buffalo Bob Smith was going to be in one of the Exhibitor’s booths.  Cool, I thought …..maybe we could go into the show on a lunch hour and see Buffalo Bob.

My thought was, “who cares”…..I still would like to meet Bob Smith, so on the second day of the show, Bill and I made a plan.  We skipped our lunch and went right into the exhibit hall. We found the aisle, and rather excitedly, walked as fast as we could to find Him.  When we reached the booth, it looked rather sparse.  There were no flashing lights or music or anything special like some of the other exhibitors had, and I couldn’t tell you what type of toy they were trying to sell but “There HE Was..the One and Only Buffalo Bob.”

He looked exactly the same except he had white hair.  He was in his Buffalo Bob Costume, fringe and all, sitting at a table signing autographs.  There weren’t too many folks on line….only two other people were there when Bill and I joined the queue.  I felt bad that there weren’t more groupies waiting to see him.  Hey, it’s Buffalo Bob Smith….what’s the matter with everyone.  Don’t they know WHO he IS?

We waited for just a short amount of time, and I remember thinking that this was really cool.  Here I was a mature woman, almost fifty years old, and I am finally going to get a chance to meet one of my childhood heroes.

At last, it was our turn. We proudly walked up to the table where he was seated.  He looked right up at me and said, “Well, what’s your name young lady”……...His voice was the same voice that I had heard soooo many times emanating from my TV set while sitting crossed legged on the floor of my parent’s living room, and in an instant, as if I were in some kind of a time warp, I turned back into a 7 year old little girl. That voice……..his voice…….I was startled, stupefied and completely paralyzed.   I couldn’t talk, I couldn’t think…..I just stood there saying something like…..  ”Ahhh….  ahhh…. ooo…. ahhh… oooo”….. completely dumbfounded.  My name…..I don’t have a name….what’s my name?  It was unbelievable what was happening to “Miss Blasé.”  Luckily, Bill saved me and said, “Her name is Rosie.”

Buffalo Bob picked up a small black & white picture of himself and Howdy Doody and signed it “Hi Rosie, Hugs from Howdy and Buffalo Bob.”  He handed me the photo; I took it and just stood there feeling like a complete idiot.  Bill, said my Thank Yous and gently guided me out of that booth.  When we had walked about fifty feet away, I came to my senses.  “Oh My God” was the first thing to come out of my mouth.  “I acted like such a jerk…...what in the world did I do?”  I asked Bill, “should I go back and apologize for being SO stupidly star stuck…..he must think I’m out of my mind.”

Bill, lovingly squeezed my hand, guided me out of the hall and said, “you don’t have to explain anything to him.  He get’s it, believe me, he get’s it.” 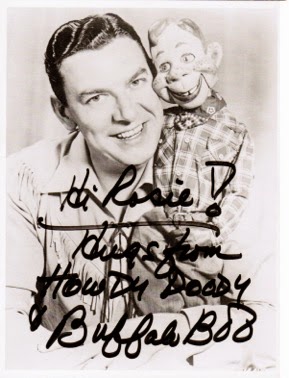 
Posted by Rosie Novellino-Mearns at 1:04 PM

Rosie Novellino-Mearns
New York, New York, United States
I am a retired Ballet Dancer who has changed direction and became a Lyricist (with my husband Bill a Composer). Bill and I met each other at Radio City Music Hall, where I was in the Ballet Company (yes there was a Ballet Company) and Bill was one of the singers. We are both very proud to have been instrumental in saving Radio City Music Hall from being torn down in 1978. I was elected "President of the Showpeople's Committee to Save Radio City Music Hall." The committee succeeded in having the Interior of the Music Hall made a Landmark. I have just completed writing a book on the whole experience. Since Bill and I have been married, we have written the score to three Musicals....two of which I have penned the Script as well. I have written four short stories which are posted on this Blog. My passion is my husband and our passion is the Theater.